In this expanded edition of Content POV, Richard Baker, a senior investigative journalist for The Age, Melbourne, takes you to step by step through the backstory of The Last Voyage of the Pong Su and the entire creative process behind the ten-episode podcast. Siobhan McHugh, Associate Professor in Journalism at the University of Wollongong, Australia adds to the conversation.

The Last Voyage of the Pong Su brought home Gold in Narrative/Documentary Podcast from the Grand Jury. Richard Baker, the senior investigative journalist for The Age, Melbourne, Australia, was creator/reporter/host. Siobhan McHugh was consulting producer 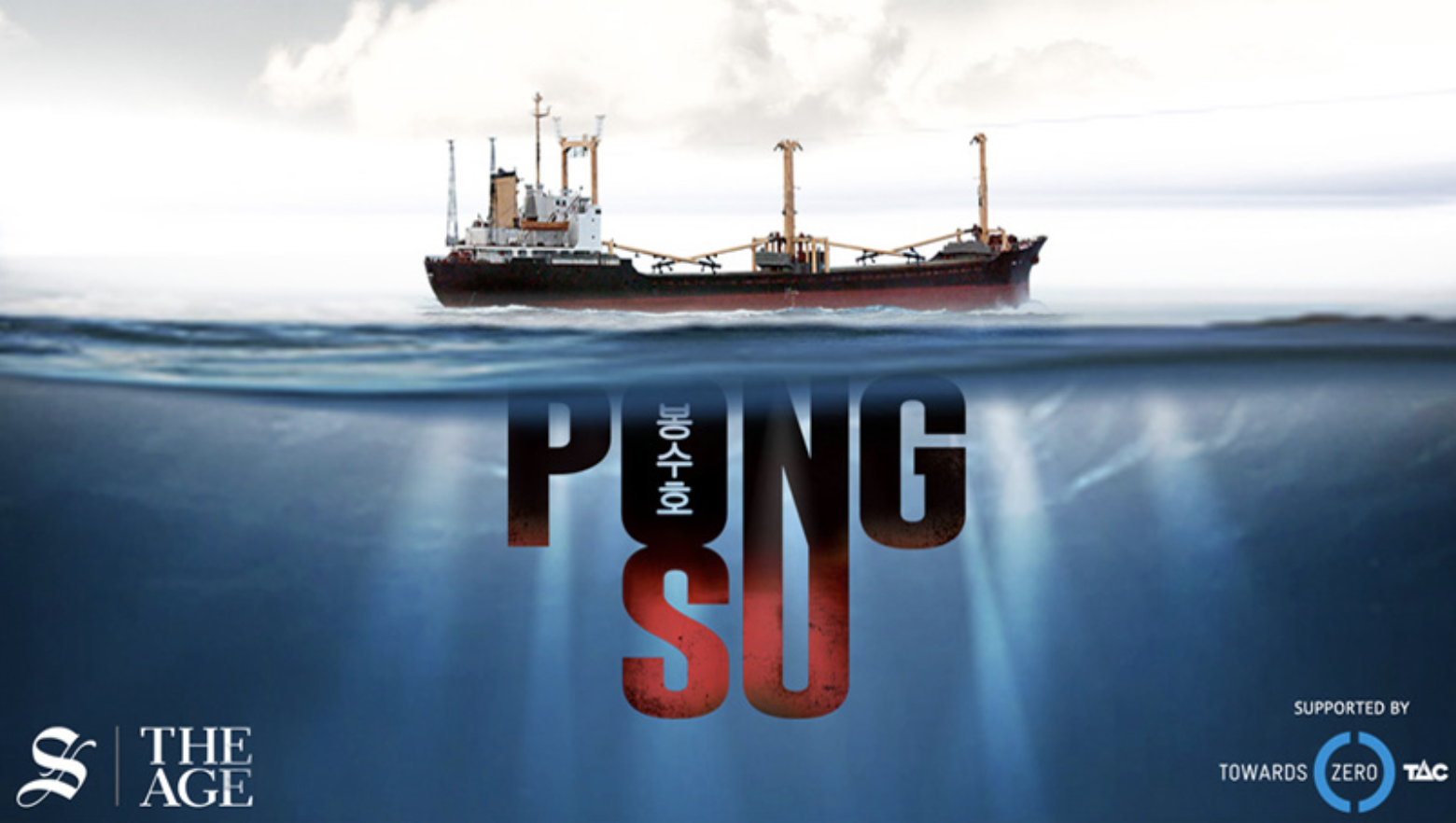 “I grew up close to a beautiful part of the Australian state of Victoria called the Great Ocean Road, which is where the story of the North Korean cargo ship, the Pong Su, and its crew, unfolded. Back in April 2003, the 106 meters long Pong Su appeared incredibly close to the shore near coastal towns Lorne and Wye River. It was listing about in huge swells and locals feared it would hit rocks. Later that night, two mysterious men were lowered overboard on a small rubber boat along with 150 kilograms of high-grade heroin. Waiting ashore were three couriers, which included one man from a major Asian crime syndicate, who was meant to deliver the $100 million haul to customers. But the ferocity of the ocean ensured everything went wrong. The rubber boat was smashed by a 10-foot high wave. One man drowned, the other somehow survived and the drugs were strewn everywhere. The aftermath of this was captured on a listening device installed in one of the cars being used by the onshore couriers by the Australian police. These men didn't know their every move had been watched for a week or more. What happened next was a series of dramatic arrests, a high stakes chase at sea, and a long court battle where unusual friendships were formed. I was always fascinated by this story and it is still one of the most exciting things ever to happen in these sleepy coastal towns. I knew from the start that the opening scene had to be the sound of the ocean and the chaos on that dark lonely beach when the drug import operation went so wrong.”

TURNING IT INTO REALITY

“Having a vision is one thing, but you need to secure talent and audio to make it a great podcast. So I set about contacting key players, from the federal police agents, prosecution and defense lawyers, coastal Aussie locals, North Korean defectors, special forces Australian troops, a Navy commodore, United Nations sanctions experts and, by a stroke of luck, eventually found the surviving man from the ill-fated rubber boat journey. Getting co-operation from the people at the heart of the drama is fundamental in any form of storytelling, but particularly audio. In this case, there was a very important bonus: Hours and hours of police listening device recordings, undercover footage, and interviews with North Korean sailors and drug traffickers after their arrests. We were given access to this and it made all the difference.

Once I secured all of this I knew we had a story to tell. That left the big question of how to do it?”

“I like to work with a small team of people whose individual talents I admire and who I know add value. In The Last Voyage of the Pong Su, I wanted a young and extremely talented producer called Rachael Dexter to be the EP. We worked together on my 2018 podcast Wrong Skin and I knew her range of skills, from terrific audio and technical abilities to her organizational rigor would be ideal. I also approached radio documentary makers and academic Siobhan McHugh to join us. Siobhan had been an important part of my previous podcasts, Phoebe's Fall and Wrong Skin. Her nous on building characters and creating unique soundscapes is the top class. Finally, I had a former Age newspaper colleague and brilliant writer Kate Cole Adams join us for narrative advice. Kate is an expert at the structure and finding a deeper meaning in a story. We got together in a room at The Age newspaper in Melbourne and over two days sweated out a story arc on 10 sections of a whiteboard full of sticky post-it notes. This became our bible for our 10 chapter story. It wasn't easy as our podcast covered almost 20 years, several countries, and had 33 characters. It was clear from the outset we had a tremendous action story and police procedural. But we wanted more. So we made the men on the Pong Su from North Korea the focus. By doing this we had our contrast of the big fish (the North Korean regime, Asian crime bosses) and the little fish (the ship's crew, the drug mules). This tension allowed us to explore all sorts of themes that everyone can relate to The absence of choice, the role of luck, duty, and friendship.”

“We had done a bunch of recording already by the time we developed the story arc. Rachael and I, and sometimes our company's head of audio Tom McKendrick (EP of Phoebe's Fall) headed out into the field to interview our characters. I always like to have people in their natural surroundings if possible. So we travel. I also wanted the ocean to be a big feature of our sound. This had to be cinematic. So we spent a lot of time on the coast. Rachael and I were even fortunate enough to travel to Hong Kong to spend time with the leader of the Australian police investigation into the Pong Su heroin importation. We captured lots of different sounds there which helped us transport the listener to Asia when the story went there. The writing process went like this: I would go home with our "bible" of the story arc. It takes me a few days to draft a script for each episode. I share the draft with Rachael, Kate, and Siobhan and they review and come back with suggested changes. These range from the use of a word to shifting an entire section somewhere else. Most of the time, they are right and I make the changes. As I said before, you have got to respect the skills of those you work with or there is no point in being in a team. With a final script in hand, Rachael and I would record my narration and she would painstakingly insert all the audio grabs from our characters and sounds we had identified. My job was easy compared to hers. We would all then listen to the first take and make further changes. Sometimes words that look great on paper don't sound so good. So we would repeat this until happy and then move on to the next episode. I would also write stories for the newspaper, website, and social to lead into each weekly release of an episode. Kate and Siobhan's input here was remarkable and so valuable. Their suggestions made things so much better.”

“We wanted The Last Voyage of the Pong Su to push the boundaries of what a podcast can do and how it can sound. That was a clear ambition from the start. I was fortunate enough to secure some major sponsorship for the project, so we had a budget to work with. We had Asian-Australian actors voice the English translations of the bugged recordings of the drug couriers. We started each episode with a poetry reading that alluded to the mood of what was to come. We had a wonderful Sydney composer in Vicki Hansen create a bespoke soundtrack to each episode. She got the story and the moods so well. Her work made our podcast so cinematic. Finally, we had a veteran sound mixer in John Greenfield polish each episode and give it a big big sound. It was a privilege to work with everyone on this unique story which gave the audience an insight into life in North Korea and hopefully creates some empathy for our fellow humans.”

“This is an excellent summary, Richard, of the process behind the podcast. The wide-ranging research, scope and depth of interviews, and amazing bonus sound such as the bugged recordings of the drug mules were gold standard raw material for a narrative podcast. All it needed was to be beaten into shape, as you describe!”

“I’d just add that the intensive listen-back phase to the draft mix is crucial. Besides Richard's important point re how different words are in print and in sound, you need to listen IN REAL TIME to get a sense of how the pace and textures are working - to hear where does something get draggy, or an interview grab loses oomph on the out, or conversely, where a voice is butted up too tight against another voice, so that impact is lost. Sometimes you need to put space around voice, to 'let it breathe', as is our mantra. And of course, adding the right sound in the right place for the right duration is another key factor in animating the story - what I call choreographing the sound.”

– Siobhan McHugh, Associate Professor in Journalism at the University of Wollongong, Australia & Consulting Producer, The Last Voyage of the Pong Su

Content POV: Diego Cannizzaro, owner of DMC Studio and Creative Director/Head of Graphics and Promotions for Canal 9 and IP Noticias

The multi-faceted and incredibly talented Diego Cannizzaro brings his industry experience and award-winning perspective to the 2023 New York Festivals Radio Awards Advisory Board.  Since 1995 ..